…on a magical trail beneath mountains hiding behind murky mists.

At school, we’ve been working on starting stories, so apologies for the opener. It may not get any better, but rest assured, I’ll stay away from fiction and stick to the facts. PlaidCamper facts, anyway. Perhaps you’re a little concerned about the spelling?

Last weekend was a holiday long weekend, and, as science, statistics and superstition has taught us, that meant lots and lots of rain, starting at 4pm on Friday, then stopping at 8am on Tuesday. So, camping plans were abandoned, and a new hike sought on Sunday, never mind the weather. We wanted to visit the Spray Lakes area south of Canmore, into Kananaskis country, and follow the Karst Spring trail. A trail leading to a geological feature? Let’s go!

A weather eye out the window just before departure confirmed it was raining, but by the time we exited the parking garage it had started to snow. Hmm, I thought. Still early, and when it warms up, it’ll soon be just rain again. Forty-five minutes later, we were crawling across the prairies and into the foothills in driving snow. I am an almost outdoorsman.

We had fun(?) slipping and sliding down the Smith-Dorrien Highway, likely a lovely dusty road in summer, but current conditions had reduced it to a series of water-filled potholes linked by treacherous gravel stretches. Those were the better bits. When we weren’t slipping and sliding, we were bumping and jumping, and not in a good way.

Such fun. The snow had become so heavy that we couldn’t see the mountains or the lakes – and this is a narrow valley. We ploughed on, arrived at the trailhead lot, staggered out of the car, reattached loose fillings, and set off on the Karst Spring trail.

It was probably the lack of any views due to the snow-rain (Snow-rain? Ha, I knew it would improve!) mix still falling, but the first part of the trail isn’t that interesting – scrubland and small trees each side of a wide track. Stick with it though, and after a couple of kilometres the trail rises into denser coniferous forest, and the atmosphere changes. The path narrows, and the humidity increases. There is more standing water on the ground, and the forest floor, boulders and fallen logs are covered with moss. Patches of wild flowers grow here and there, and witch’s beard hangs from branches. Enchanting!

A sharp left turn descends to Watridge Lake. This lake is popular with anglers looking to catch trout, but no anglers were present. In fact, we saw only six other hikers all day. The first couple we encountered barely fifteen minutes into our hike. They’d been camping overnight, and looked damp, and thoroughly downcast. When we told them they were mere minutes from the parking lot, their faces lit up, and they actually started to run! We were happy to help!

Past Watridge Lake, the trail becomes magical. You have to cross wetlands on a narrow boardwalk, which lends a sense of achievement when you don’t fall off. The forest was hushed, melting snow a threadbare carpet on the mossy floor, with drips and drops of rain falling softly. As we followed the path, the faint sound of rushing water grew steadily louder.

Another turn or two and we were alongside the most delightful creek! We knew the spring couldn’t be too far, and continued up the pathway as it hugged the cascading creek.

Photographs don’t do justice to the mossy, emerald treasures we saw as we approached the source of the spring. Hiking boots don’t allow for much of a jig on a muddy, rock and root ridden path, but I swear I did a little dance of joy. Steady, PlaidCamper. Must have been a sprinkle of fairy dust, or maybe an allergic reaction to Fairy Slipper (thanks, Walt) pollen, but this was a special place.

With time pushing on, and an increased chill in the air, we couldn’t hang around too long. We did promise that we’d return, perhaps in the fall, to uncover the autumnal charms of a truly wonderful trail. 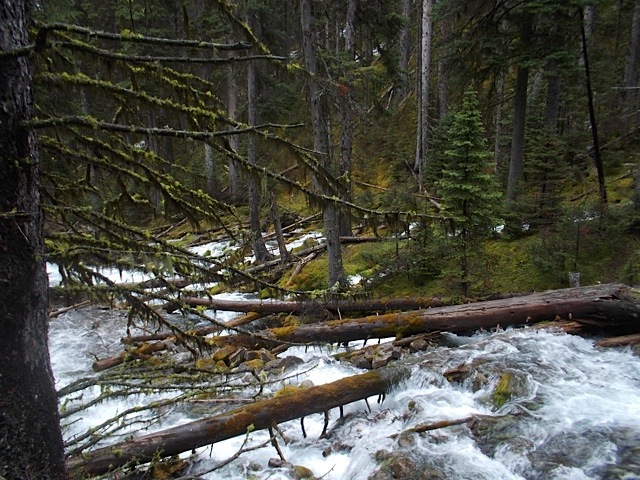 We’d fallen under the spell of Karst Spring, a magical place deep in the forest, hidden in the shadow of mist-shrouded mountains. (We’ve been working on story closings as well – apologies once more!)

On our drive back home, the cloud cover lifted enough for us to see some of what we’d missed on the journey in. Wild country. 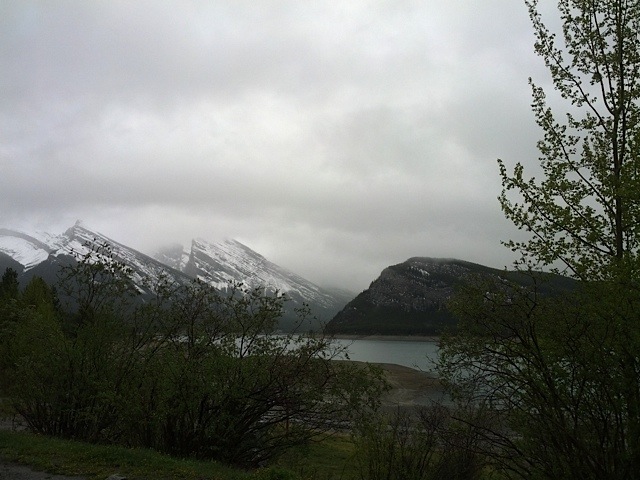 Thanks for taking the time to read this, it is always appreciated. As ever, please feel free to leave a comment or share a story, and have a wonderful weekend!

20 thoughts on “Mountain magic! A spell was karst…”