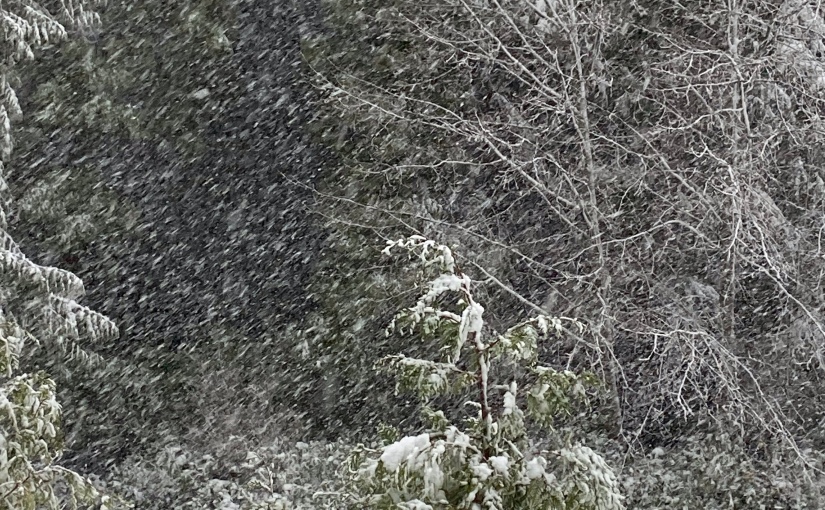 OK, Scout, keep your hair on!

Why the big hurry from Scout? I think because she’s a snow dog, and the weather gods had heard my pathetic whining last week, so we were rewarded with a day of snow. I believe that’s how these things work? Snow? Hooray! First thing in the morning, it wasn’t all that much to get excited about – don’t tell Scout I said that – but we went down to the beach anyway. Light flurries, and the start of a biting wind, but that was it. Pretty enough.

As the day progressed, the wind got wilder and the snow got heavier, to the point where we got home and off the roads before other travellers also got off the road by sliding into verges and walking the rest of the way. Yes, there were a number of abandoned vehicles scattered at various points along the road the next day, but no serious incidents.

It turned into the sort of day best enjoyed from home – it really wasn’t a strolling in a winter wonderland kind of day due to the very blustery conditions. Scout indicated she wasn’t too happy about that, so I opened the front door for her to confirm that perhaps she didn’t really want to go out? She took one step – maybe not even as many as that – and promptly turned back indoors. Yes she’s a snow dog, but also a wise dog.

Well, we did go down to the lighthouse, without Scout, to see how it looked in the snow, but it was so sideways and gusty, the snow wasn’t sticking and details were hard to find. We beat a tactical retreat and told Scout it was great…

I’ll leave it here for this week, happy enough that we had a pretty cool snow day or two, and wondering if the call for more snow before the weekend is accurate…