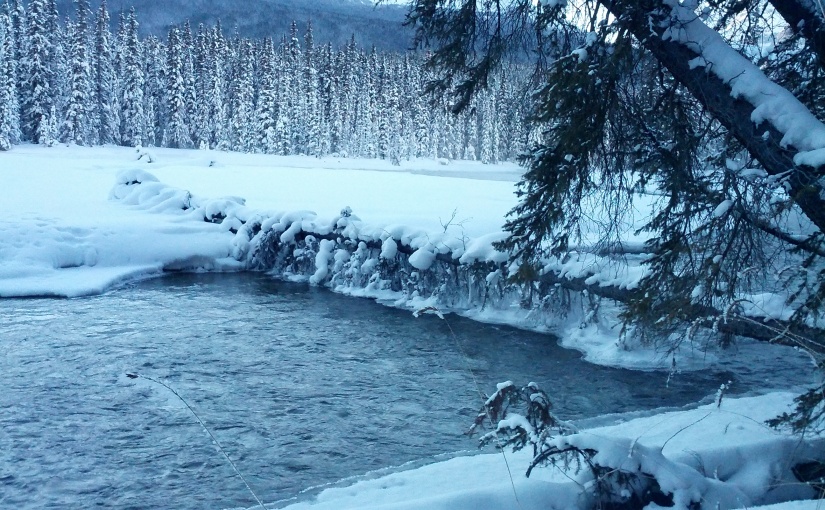 Without forgetting bloody, intense, and controversial. Here we go, #4 in an occasional series, the latest in my list of favourite wilderness and outdoor movies. This time, I’ve gone up to the minute, unafraid to seize the bull (or buffalo) by the horns, and thrown myself headlong into the furore that is the publicist’s dream surrounding “The Revenant” (dir. Alejandro Inarritu, 20th Century Fox, 2015). You know, the one where a man goes for a very long walk intent on exacting revenge upon those who left him for dead. It’s not heavy on plot, but it is heavy on everything else.

How could an almost outdoorsman resist?! Rugged winter scenery? Tests of survival? Nineteenth century setting? Buffalo and bears? First Nations and trappers? Beards? It’s like all my birthdays arrived at once. Throw in a much admired director and cinematographer, an excellent cast list, and it was all Mrs PlaidCamper could do to calm down an overexcited little boy heading in. Yikes, I hope I like it…

Best make my position clear here – I loved the movie, flaws and all. One large reason is that it was shot in part in Kananaskis, little more than an hour from our door. The locations had such an air of familiarity, it was like coming home on the big screen. I’m sure that many have been spellbound by how beautiful the mountain and foothill regions are as depicted in this movie. Kananaskis is an area of outstanding beauty, and the movie takes full advantage. The cinematographer – Emmanuel Lubezki – shot outdoors in natural light, often early or late in the day, and the results are breathtaking. 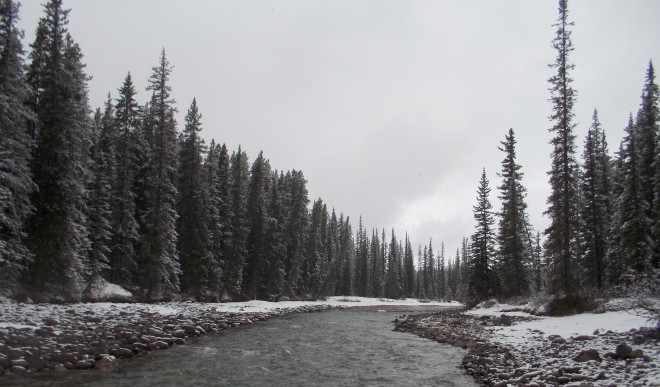 I’ve written before about how the outdoor setting in a wilderness movie can be like an extra character, and in “The Revenant’ this is certainly true. Nature here is shown as terrifying, fierce, seductive, raw, and overwhelming in scope and power. This is quite possibly almost to the detriment of the movie. The human tales of revenge, greed, betrayal, love, and honour are compelling enough, but the sheer magnitude of the movie settings threaten to swamp or distract from the story. I didn’t mind, because the movie is more than just beautiful to look at. It is bold, thought-provoking and challenging. 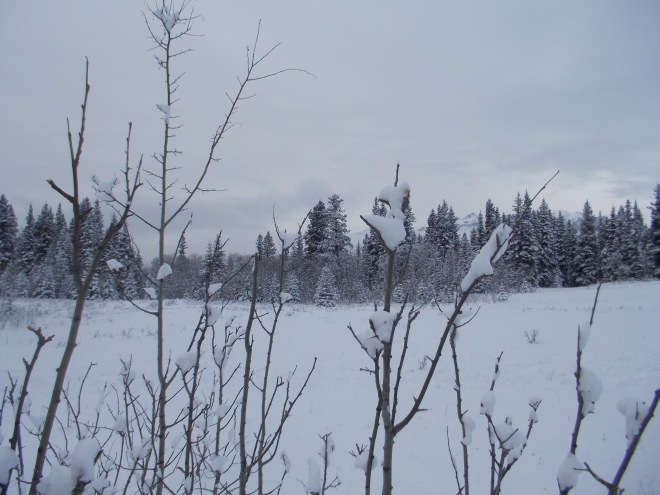 There is no beauty in violence, and “The Revenant” doesn’t shrink from being brutal. The scenes of conflict between Native Americans and European fur traders are realistic. Arrows fly, knives stab, lances pierce, musket balls strike, and hatchets inflict awful injuries. The movie has received criticism for being violent. Given the setting and source material, it is naive to expect this movie to be free from violence. I don’t think the violence is gratuitous; it serves the story, and most viewers ought to be aware of this before purchasing a ticket. However, it is more than wince-inducing, as acts of violence should be.

Staying with the violence, not all the horror is between humans. There is a bear attack, and it is scary. You will wince (again), forget to breathe, and grip your seat. You certainly won’t blame the bear, or the character for defending himself, and you’ll never wonder again what a bear attack might feel like. It is absolutely terrifying, and for me, wonderful movie-making. I want to be moved to feel something, and if it is fear, then great.

Feeling transported by a story on screen or on the page is essential. The setting works, the action engages, and, most importantly, the acting is convincing. You might think that some of the harrowing situations endured by Hugh Glass – played by Leonardo DiCaprio – are too much for any one human to survive, but DiCaprio gives his all in showing the cost Glass pays for survival. As his travails mount, you do start to think maybe Glass/DiCaprio deserves a break, and could you really survive even one of the incidents?

It is all so well acted, so thoroughly immersive, that you forgive the slightly ludicrous powers of recovery displayed by Glass. Based on true events, my guess is the writers and director fell prey to the tendency to over dramatize when there was no need, and shrink timelines to serve the running time. A slight criticism, and it leads to my next, that the movie is too long. I do like a movie that can breathe, unfold and explore. However, for this movie, the truth is the revenge plot is clear, and maybe we don’t need quite so many tribulations and sufferings for Glass. The audience will get it! Those rivers and streams are deathly cold, the storms can kill, bears are a bit dangerous, wounds do get infected, starvation isn’t great, don’t get abandoned and buried alive, and falling over cliff edges will hurt. Revenge must really be a motivator for Glass…

That said, you have to admire the artistry. The director is in full control of his camera, with close ups of actors pulling back to reveal scenery and backdrops that delight. The camera weaves and bobs, low along the ground, then at human eye height, in long takes that are expertly constructed to draw you in and feel and see what the characters are experiencing. Their surprise, shock, horror, and pain is yours too.

Like I said at the top, I did love this movie. As an almost outdoorsman, I could only admire the survival skills of Glass. I wouldn’t have lasted one tenth of the time! As a resident of Alberta, I delighted in how the movie showcases our outstanding province. For the convincing period detail, gripping yet unsettling action scenes, wonderful acting by the entire cast (Tom Hardy has a marvellous role, and his character, John Fitzgerald, is more emotionally interesting than Hugh Glass), and amazing control the director exerts scene after scene, I highly recommend “The Revenant”. It’s not for the squeamish, but the fully immersive experience, the commitment of the cast and crew, and sheer boldness of the undertaking makes this one to watch.

Have you seen “The Revenant”? Is it as good as I think it is, or an overlong and violent art house movie? As always, thanks for reading, please feel free to share a story or leave a comment, and keep your guy ropes secure.

36 thoughts on “Brutal, bold, and beautiful”