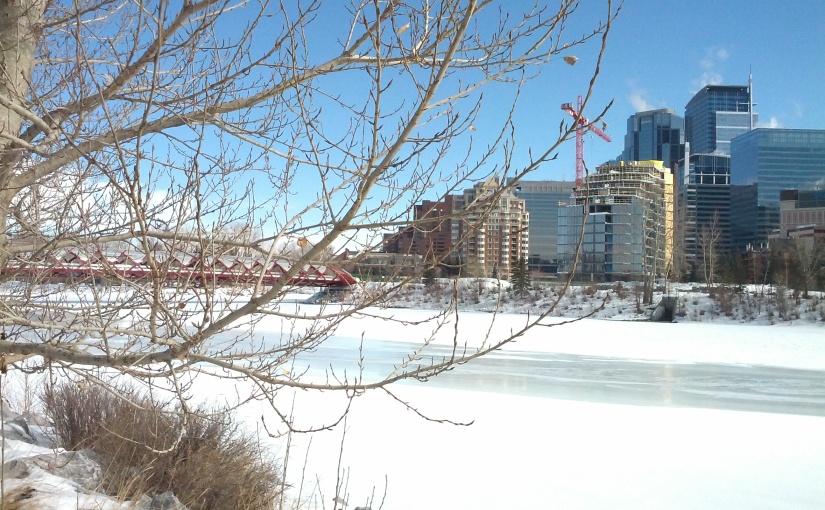 …between winter and spring, as the ongoing thaw-freeze-thaw continues here in Calgary.

Recent days have been mostly pleasant – the blue skies and sunshine are welcome, although the afternoon slush pools are less so. Those murky pools are growing, and can’t be trusted – they have hidden depths, according to my soggy socks. We’ve been pavement skating in the chill mornings, and puddle-jumping in the squelchy afternoons, wandering the banks of the Bow between two bridges.

The banks of snow along cleared pathways have been melting away, the fluffy pillows slightly less deep each day, much to Scout’s surprise. What looks an inviting pile of snow to wallow in, turns out to be ice-crusted and treacherous, quick to collapse under an unsuspecting canine. I try not to laugh… 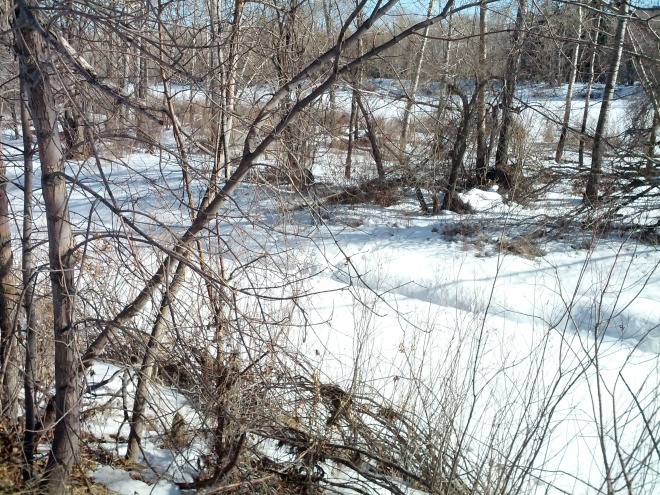 All the melting snow is quite pretty to look at. Craters and hollows have appeared, and where the sun has really hit the snow, there is a glassy layer along the edges. Some of the ice crystals look feathery, and some look like scales, flashing in the brilliant sunshine. Tufts and clumps of brown grass are appearing here and there, and there was even a hint of green on a particularly sunny patch.

It’s been magpies, chickadees and scurrying squirrels along the river banks, adding to a sense of spring, and adding an extra slippery challenge as an excited Scout leaps at each one. One such leap and lurch took us down to a pile of river rocks, nicely warmed by the sun, a spot to rest, look up and downstream, and try to work out who is leading the walk. Calm down, or we’ll walk over the wobbly bridge again…

All too quickly, we seem to be leaving winter and welcoming spring here in the city. That being said, it’ll be many weeks before any real greenery emerges, and in fact heavy snow is forecast for the next day or so, but the hints for warmer days are getting stronger. Here’s hoping for a short mud season! A brief post this week – I must go and find a dry pair of socks and some sensible footwear, before heading out to negotiate those untrustworthy slush pools once more.

18 thoughts on “Bridging the gap…”