We took a short stroll down to the outer harbour then past the small campground overlooking the water. We needed to stretch our legs and shake off the disappointment of England missing out on a golden opportunity to make it to the World Cup final. Beaten in extra time by a determined and more skillful Croatia team, we could only commiserate and also celebrate the tournament success of an England team most thought wouldn’t get as far as they did. Maybe next time…

Anyway, our little stroll found us ending up on the outside deck of the Eagle’s Nest pub, Mrs PC’s first visit up there, with a fine view across the water to Mount Ozzard. Often, the low mountains opposite Ucluelet are swathed in mist and fog reaching down to just above the first layer of trees. There are days where if you didn’t know, you’d swear there were no mountains. Not this past week, where the weather has been fine, and the evenings summer golden. 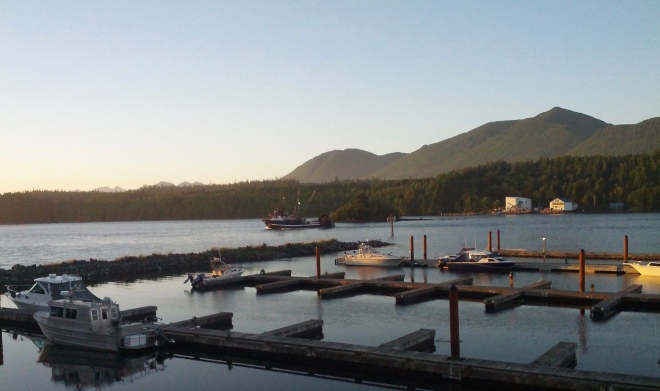 Summer golden? That calls for a glass of Tofino Blonde ale, and we couldn’t ignore the call. A perfect match, unlike the game earlier. Mrs PC seemed slightly bemused by Scout knowing her way about the place, the way the bar staff seemed to know her, almost as if she’d been to the Eagle’s Nest many times before. That’s a mystery to me…

We sat and sipped, enjoying the beer and the view. A pair of bald eagles circled overhead, occasionally swooping down and disappearing behind Lyche Island, and we’d wait for them to reappear above the trees, their cries clear in the calm evening. A few folk were busy on fishing vessels below, finishing up the day, preparing for the next, and in the deeper channel, a larger boat or two chugged past slowly. Nearer the shore, colourful kayaks paddled by, and they were a pretty sight in the soft light. A good evening to be on the water.

A small glass of Okanagan Spring pale ale (not as good as the Tofino Blonde, but we had to see) and then back to the outer harbour to catch the last of the sun falling behind the trees up channel. 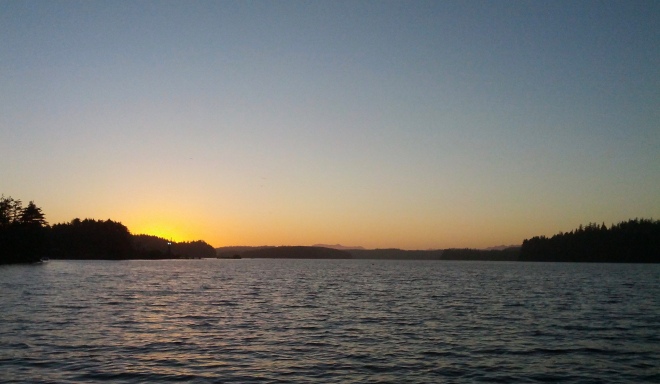 A very pleasant stroll on a summer evening. Well done to Croatia, here’s hoping for an exciting final this coming Sunday, and because it was our home for a few years, Allez les Bleus!