Every day of my recent stay in Ucluelet I went for a wander, rain or shine (mostly rain), and the wandering almost always included one or more of the docks dotted along the water.

I’ve written before about my complete lack of nautical skills, yet I’m drawn to the boats – I can’t help it. Is it in my genes? My Dad, or Old OldPlaidCamper, as he’s never called, did run away to sea when he was a boy. Imagine, a teenager in the merchant navy and seeing the world. He traveled to many parts of the globe before he met my Mum and settled down. He has told a story or two about that time, but I suspect there are many tales as yet untold.

Yes, that must be it – I’ve inherited the genetic possibility (huh?) of a life on the ocean waves. This makes sense – after all, I have almost completed Patrick O’Brian’s wonderful cycle of Aubrey-Maturin novels set in the British Navy of the early nineteenth century. Is that nautical preparation? I think so! Although, all those beautifully detailed and descriptive stories, and I still can’t tell a topsail from a topgallant, and I’m not too sure about a futtock shroud…(but I love that there are futtock shrouds – thank you, Patrick O’Brian!)

Back to the docks! Rain or shine! Port and starboard! Futtock shrouds to the rain, I say! The photographs this week are from a greyer day or two, when it was about to rain or had just stopped. As you can see, as well as the boats, I like the paraphernalia dotted about the vessels and docks, some of it appearing cast down at random, but it likely all has a purpose that my landlubberly eyes can’t figure. 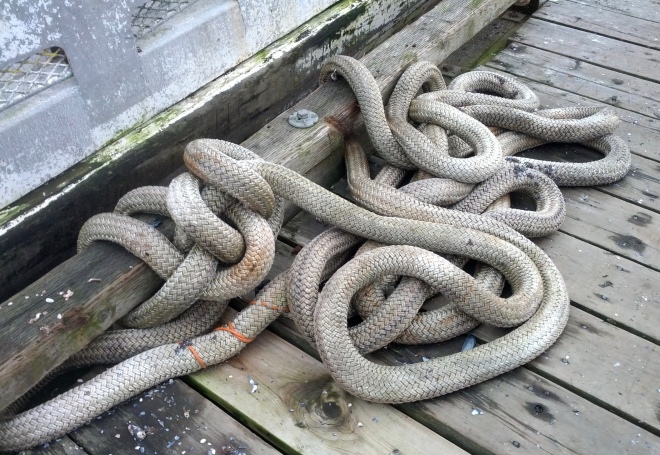 I strode up and down every walkway, eager to see it all, slowing to take in each boat, stepping over a coil of rope, or the cables plugged into the big fishing boats. Every now and then an explosive splashing and flurry of wings would startle me from my daydreams, and I’d stop to admire the low flight of a duck I’d unwittingly disturbed, watching it scoot away across the water.

One morning, a Blue Heron was perched atop a piling, and remained unbothered by my presence on the dock. It looked very dignified up there, magisterial and generous enough to share the space. Herons, kingfishers, mergansers, bald eagles, gulls, and other birds I can’t name, were often present – it gets busy all about the water.

Big boats, little boats, new boats, old boats, grey boats, white boats, tidy boats, messy boats, boats for work, and boats for play – they all looked rather wonderful, moored up in the rain. Am I day-dreaming escapist notions from the global news storms that seem to sweep in every day? Perhaps, but being on the coast is retreat enough, and I wouldn’t want to disengage completely (even allowing for how our present day swirling and choppy political currents make becoming entirely unmoored a rather tempting prospect…)

Let’s be honest here – I’m happy enough to paddle a kayak or splash about in a canoe, but it is highly unlikely I’ll ever learn to sail and head out into bigger waters. I’d need a promise of endless calm water, and I think sailing doesn’t work too well on flat seas. Oh, futtock shrouds! No, this is absolutely fine, and I’ll stick to the fun that is the dreamy wondering and wandering around the harbour in these dock days of winter.

13 thoughts on “The dock days of winter”