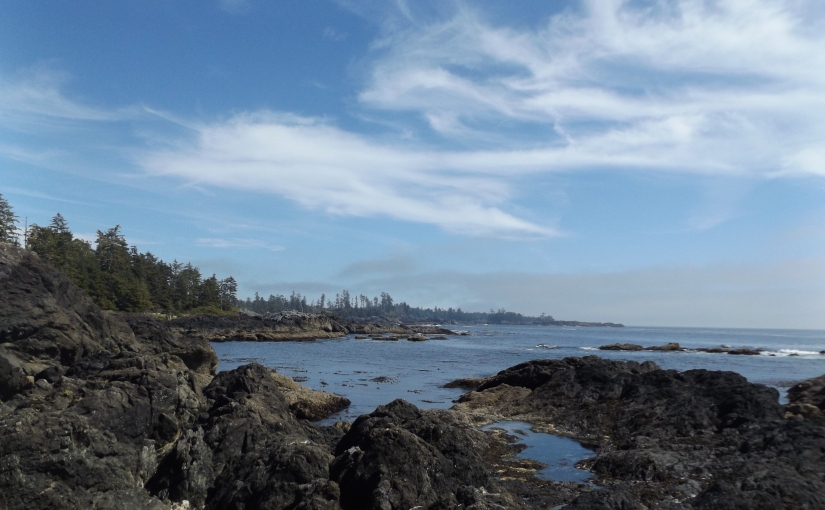 Scout and I often end up at Indignant Cove, and often on a Monday evening. Mrs. PC is at her exercise class, keeping healthy and in shape, thinking about the future, all that stuff about using it now so you still have it later. I get a bit hot under the collar thinking about exercise, and tend to wander off with the dog to find a quiet place to sit and think about a healthy future. Meditation burns calories, yes?

A gentle – I mean a very brisk and pacy – walk along the Wild Pacific Trail, and we end up at a small shell, gravel and rocky beach overlooking the ocean. Scout gets to chew as many sticks and logs as she can – crunches? – and I clamber and stumble about a bit, huffing and puffing and getting quite exercised each time I slip or trip. It’s a full body workout…

Most times we are sat there – I mean striding up and down the shore – we spy a bald eagle or two, see fishing boats out on the ocean, and wave “hi” to passers-by up on the trail, especially the joggers and runners. Sometimes the mosquitoes are out in force, so that’s quite a bit of arm stretching and balance, but if there’s a breeze, they are kept at bay.

One recent evening, the tide was getting high, and water was surging up the channel to the left of where we were sitting – just a quick breather. The whump and thump as the weight of the water crashed onto the rocks was loud, even though conditions were relatively calm. A huge thud, rumble and cracking sound reverberated over us when a log smashed onto the rocks. The ground seemed to shake, and that was from a single log on a pleasant evening. Imagine a fierce storm, now that would set your heart racing…

Indignant Cove? A strange name, and you won’t find it on maps or charts. I call it that because if we continue on the trail without stopping, walking past the gaps in the logs and rocks where you can access the beach, Scout digs all four paws in and comes to a halt, looking indignant. Why aren’t we going down there? I’ve made a start on that log, and it needs finishing. Can a dog look indignant? Yes. A short, yet healthy and vigorous, game of tug of war ensues, and if Scout wins, we go to the beach. We usually go to the beach.

I like the word cove when used to describe a person. It reminds me of the naval fiction by Patrick O’ Brian, set in the early nineteenth century, where you’d expect someone to be called an ill mannered cove if they weren’t of good character. I’m not suggesting Scout is ill mannered, far from it. But she can be an indignant cove if we don’t stop at Indignant Cove.

Well, I’m exhausted after all that, and will have to rest up until next time. Thanks for reading, and have a wonderful weekend!