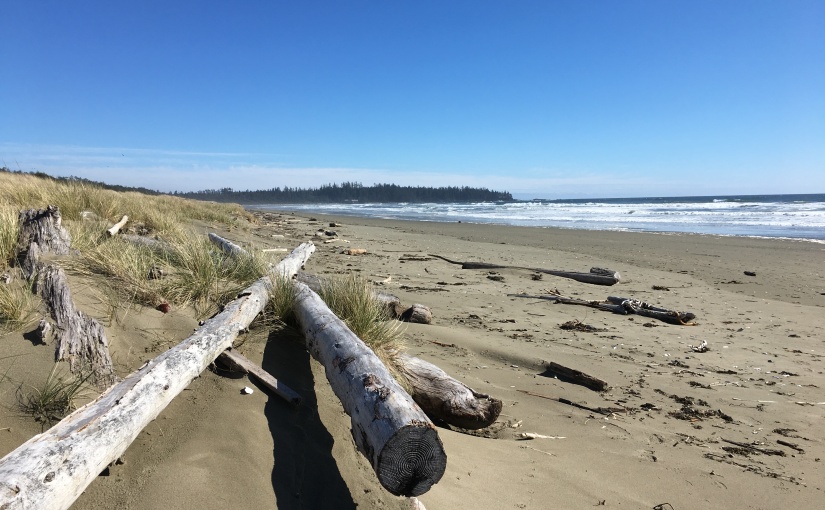 Last Friday turned into a pretty good Good Friday. Sunshine was promised and eventually made an appearance in the early afternoon. It seemed like a beach day, so that is where we went.

We hadn’t been to Wick Beach in quite a while, and it was a very pleasant stroll we were having when we saw quite a crowd of ravens hopping about a clump of something in the distance. As we approached, the ravens flapped off, and we could see the sizeable remains of – I think – a sea lion. We skirted past swiftly, not wanting to enjoy the aroma any longer than necessary, and to give space back to the ravens.

A little way beyond the body we saw a juvenile eagle sitting on a stump, no doubt waiting for us to move on, and perhaps hoping the ravens would leave a little something.

As we wandered by, two adult bald eagles flew past us towards the remains. We thought it was starting to get rather crowded. If it hadn’t been dead, the sea lion could have become quite irritated with all the attention…

We kept going up the beach, and eventually hunkered down in front of the dunes, slightly elevated on a log and amongst the long grasses. From there, the cadaver commotion was almost out of sight, and we switched our attention to the ocean, looking out for and spotting many spouting whales.

Once we’d finished our coffee, after Scout had demolished a fair chunk of washed up log, and given up digging a deep hole in the sand for me to fall into as I stood, we set off back down the beach. As we drew closer to the corpse, we could see quite a crowd. Three adult bald eagles, two juveniles, and a smattering of ravens were figuring out how the goodies were going to be shared.

We stuck to the dune side of the beach, not wanting to get involved, and anyway, after coffee and chocolate, we weren’t feeling the need to scavenge. I couldn’t believe Scout wasn’t more interested in the proceedings, but she wasn’t.

The photographs I took were at the outer limits of what my camera and shaky hands could handle, and really none too sharp, but I’ve used them here anyway, in case you’re a fan of partially consumed corpses…

When we got home, I got caught up on the blogs I enjoy, and one of them was a perfect piece to read after our earlier adventure. It made me stop and think about how vulnerable many species are. Living out here, one could (but I’m not) become a bit complacent about the numerous bald eagle sightings we are blessed with. If you have the time, I heartily recommend you head over to read Jet Eliot – you won’t be sorry! 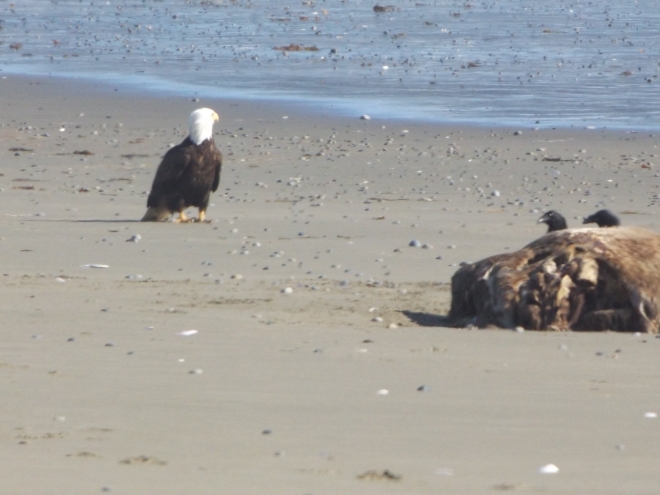 If the weather holds – and it has turned warm and sunny this week – then perhaps we’ll head up Wick once again over the coming weekend, check out the state of the scavenged. I doubt there’ll be much left, maybe not much more than a few picked over and pecked clean bones. That’s life, and death.