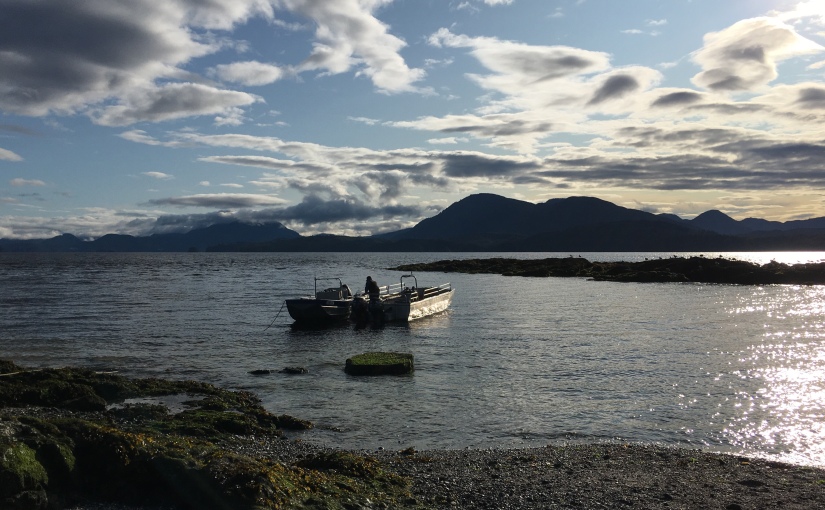 This isn’t a post about elves or unicorns (or hobbits) – phew – but how about some magic? I will, due to being rather tired, be very brief this week, and I promise to write something a bit more detailed next week.

I was on Wizard Island – yes, really – earlier this week, learning alongside a small group of students, splashing about in the intertidal zone, slipping on seaweed and scraping hands and knees on barnacles. We were being scientists, uncovering then sharing our discoveries, beaming our explorations live to students at UVic, and generally having a fine old time in the middle of Barkley Sound.

As far as these students were concerned, we were in (on?) the best possible classroom, transported there in a small aluminum boat, past bald eagles, basking seals, foraging bears, and with the prospect of a humpback whale sighting. We were lucky enough to spot three humpbacks spouting on our trip back, and I wish you could have seen the students when this happened! Such excitement, because we were relatively close, and this excitement from young ones quite used to spotting whales from the shore.

All this and their first ever media appearance before 10 o’clock in the morning. Not that I couldn’t keep up – I did, just about – but I am mighty tired in the best possible way after three full days of marine activity. I will sign off this week with a few more photographs from Wizard Island. I don’t know about magic, but I do believe there are magical places…

More to follow. Thanks for reading, and have a wonderful weekend!