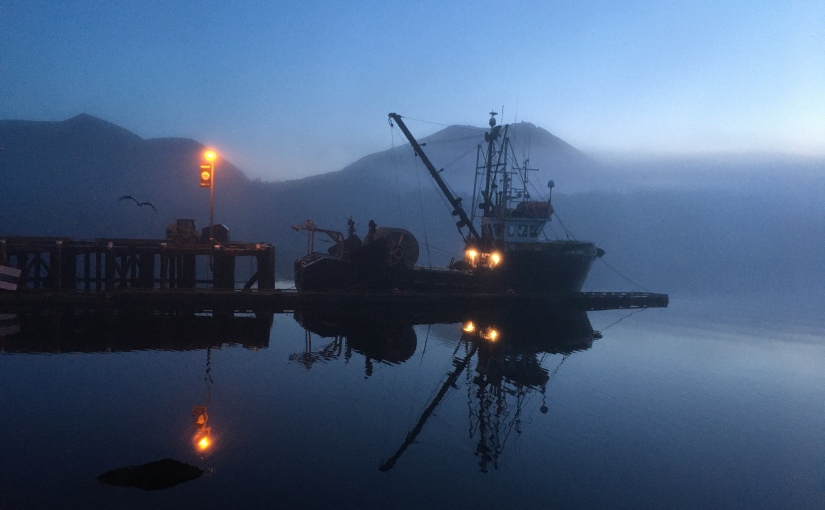 A brief piece featuring a wolf (sort of – it’s less exciting than you might think), the moon, a beer, and me being a morning person (sort of).

If you believe that last part, then you’re one of the lucky many and haven’t had the pleasure of my company in the morning. I really am a little ray of early morning sunshine. You could ask Mrs. PC, only she’s not here right now because she’s teaching in the province next door (somewhere snowy) so I’ve a week or two to work on my cheerful morning demeanour and become even more sunny. I doubt that’s even possible.

Fortunately, Scout is a morning person, fairly forgiving and not too chatty. All is well in her morning world provided we are out, or about to go out.

We’ve been enjoying many quiet, clear and cold morning walks, the only company being the grumpy heron on a few occasions, and once, a possible wolf. Possible?

Scout got quite growly on Tuesday morning as we passed the Eagle’s Nest. The previous day she’d been agitated through the gloom at what turned out to be a traffic cone in the middle of the road, so I assumed the same, but this time there was no cone. On we walked.

On our return and just beyond the invisible traffic cone, Scout growled again as a car drove by. She wasn’t growling at the car, but at the wolf-like creature slinking along the front of a wooden fence to our right, a dark shadow disappearing into darker shadows down by the shore. It happened so quickly, and I was so startled, that I can’t be completely sure it was a wolf. But I think it was.

We changed up our route the following morning. I can’t handle being startled by a grumpy heron and a slinking wolf at that time of day. Too, too much. It turns out I’m also not an early morning wolf person – even though I love the idea I might have seen one!

Moon over water? An early morning photograph I took a week back that happened, quite unintentionally – I’m not that attentive – to feature a small waning crescent moon. I wasn’t aiming for it, and it wasn’t the usual blur. Moon over water! Not the wolf moon, though. Perhaps I saw a large and shy dog? It’s tricky out there, when you’re stumbling through last dark and heading into first light.

Beer stuff now. Moon over water and moon underwater? Go on then. I enjoyed the above beer last weekend, and it reminded me about the photo with the moon. I liked the beer well enough, but maybe not over the moon enjoyed. A California IPA (brewed in Victoria?!) is probably best in warmer seasons. Still, tranquility is a lovely name, the can art made me smile, and a West Coast IPA is rarely a bad idea – let’s say almost four eagles!

14 thoughts on “Moon over water”