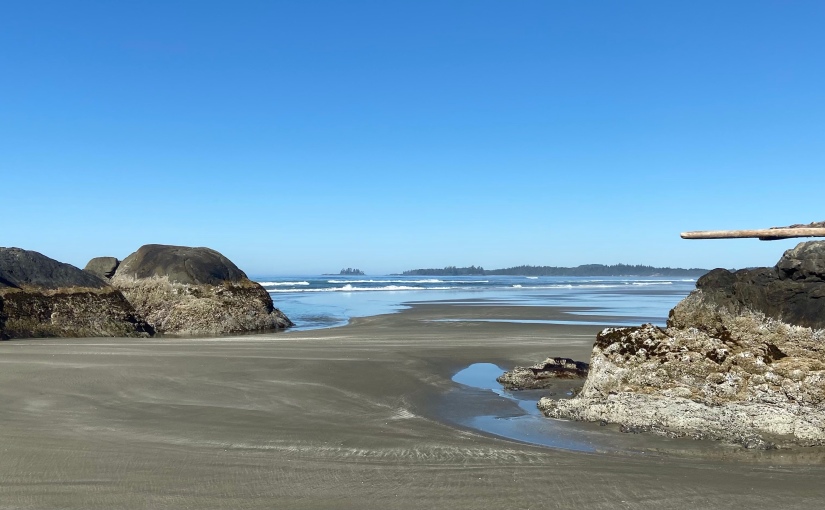 Scout was one determined dog last weekend. We went to the beach early – early enough to leave the first dog and person prints in the sand, and before the (are you sure your travel is essential?) out of province visitors started to fill the parking lot.

With Scout in charge, it was a case of whatever she’s having, it’ll be on the rocks. The refuel stop for a coffee top up, water and kibble was just barely tolerated. Yup, sticks, logs, and odour laden washed up ocean mysteries were all well and good, but they weren’t on the rocks. So on we went!

Eventually we arrived at her happy place, and after choosing the most slippery route – for humans – to the top, Scout relented and let us rest. While we recovered from the frogmarch (or dogmarch?) down the beach, Scout took up a high position to scout for threats. We observed a few gulls and a pair of passing bald eagles, but nothing to threaten our place on the rocks.

With the sun starting to feel pretty strong, we eventually persuaded Scout it was time to make tracks for the car. She excitedly picked up the scent and tracks of two slow humans and one smart husky/shepherd/tyrant cross, and away we went, off the rocks and back to the car.

When we got home, Sergeant Major Scout trampled a few circles into her cushion and promptly crashed out for three hours. Make hers a double. Probably overdid it on the rocks there, Scout.

Thanks for reading, and we hope you have a wonderful weekend!